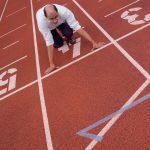 At the end of their fifth coaching session Rachael asked Brendan what he was gaining through coaching.  Brendan talked about his awareness of the difference between his habit of being negative or pessimistic and this new way of thinking positively and being proactive.  He stated that he learned his word choice directly impacted how he perceived things, thought about things, and ultimately behaved.  By choosing language that gave him internal direction and control plus focusing on the positive and being proactive, he moved from feeling stuck or trapped to realizing he had options.  He became aware that ultimately it was his choice to stay where he was and blame circumstances or do something different.  Rachael congratulated Brendan on his progress and success with this awareness and invited him to give himself credit and a pat on the back.

Rachael asked Brendan if he wanted the sixth session of his commitment to be his last or to continue.  Brendan chose to continue coaching.  Brendan said he wanted to review his goals in all areas again and then prioritize.

Brendan’s sixth coaching session was powerful.  Each time Rachael asked a question Brendan challenged himself to answer in terms of what he wanted.  By the end of the conversation he felt that his life was in a good place and he had very real opportunities and choices.  In their next session Brendan focused on choosing priorities.  He decided to work on his personal life in terms of being open to a long term relationship.  He decided to work on his career by fully engaging and challenging himself to be the top sales person each month.

During the coaching process Brendan explored what and how to change.  He decided he wanted to relax when he went out and really engage in conversations.  Brendan went to the same places with the same people and actually paid attention to them.  He slowed his pace.  Brendan’s friends knew something was different and at the same time were unable to put their finger on exactly what.  Women that Brendan talked with responded to his attention with interest in really communicating.  Some became great friends.  During his coaching sessions Brendan reflected on what happened and realized that he was being respectful of others.  He felt good and his relationships were authentic.  As this became his new norm Brendan began developing a strong, long-term relationship.

Brendan decided that he was going to apply what he was learning in coaching about being positive and proactive with words that supported that focus in his work.  He asked customers what they wanted in a car and what that did for them.  He asked them about their process for getting a car.  Customers became more comfortable working with Brendan.  In addition to closing sales at a higher rate, Brendan began building a referral network.  His customers sent others they knew and told them to ask for Brendan.  Brendan met his sales goals and succeeded in his challenge to himself to be top sales person.

Rachael congratulated Brendan on his progress and success. She then asked him how he wanted to acknowledge himself.  Brendan realized that by giving himself credit he felt confident and that in turn helped him to succeed.